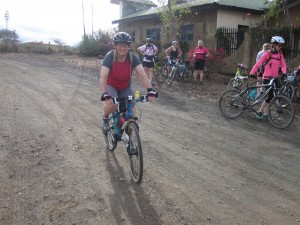 Nicola Stock on her fundraising cycle ride across Tanzania!

The fundraising efforts of a local volunteer Instructor Nicola Stock raised £475 for Herefordshire Heartstart thanks to sponsorship from two local businesses.

Nicola embarked on a gruelling 350km bike ride in aid of Herefordshire Heartstart.

Nicky cycled 350km across Tanzania over five days from the lower slopes of Kilimanjaro to the Ngorogoro Crater crossing three national parks. The first four days involved cycling between 60km and 100km, with the last day being an ‘easy’ 40km!

Nicky completed the 400km, including 4000ft of ascent on the last day. Nicky says “To put it into perspective for you, it’s like cycling on/off road from Brighton to North Wales and then cycling up Snowdon twice.”

Loraine Coleman, Co-ordinator/Project Manager for Herefordshire Heartstart would like to thank Nicky for doing the fundraising and two local businessmen for their generous donations.

The charity relies on donations and small grants to keep the service running. Any business who would like to sponsor the charity should contact the Co-ordinator for details of how they can help.

This is the second time that Nicola has done a sponsored event for the charity. In 2013, she did the 200 mile coast-to-coast wainwright walk and raised over £900 from friends/family donations for the charity. 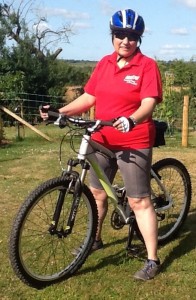