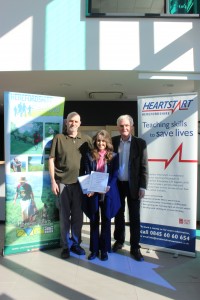 Nic Howes from Hereford has been awarded with two certificates of achievement, one from the British Heart Foundation and one from Herefordshire Heartstart for his use of Heartstart basic emergency life support skills, by helping a man who was in difficulty and had fallen into bushes.

Nic had seen the man leaning against a tree, with one arm across his chest. The man moved off, staggered and fell into bushes, hidden from site. Nic ran over and found the man thankfully still conscious.

Nic says “The man wasn’t making much sense and was determined to get up and walk home, this would have taken him across a nearby multi-lane highway despite being very unsteady on his feet, something he was clearly unable to do without falling over. The conversation pointed towards intoxication.”

Nic rang for an ambulance and stayed with the man. Nic sat behind him by, gently supported him and encouraged him not to get up. Nic had learnt about helping someone having a heart attack and the best position to support them in at the Heartstart course. When the paramedics arrived, one of the ambulance crew knew him and knew that he had angina. The man was taken to hospital. 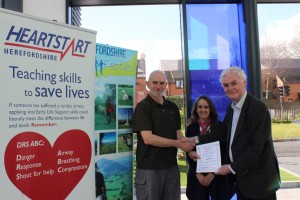 Loraine Coleman said “We would like to congratulate Nic for having the confidence to use the Heartstart skills that he had learnt. Well done Nic for staying calm, calling the ambulance, staying with the man, sitting behind him and supporting him in a position taught in Heartstart, which prevented him from coming to further harm.”

Loraine says “ Nic stated that the man may have been intoxicated. Others may have left this man to fend for himself based on this judgement, but Nic saw someone in need and rushed to his aid. Nic showed a bravery and compassion of which he should be proud. The man was clearly in need and Nic’s selfless actions may well have saved his life.”

At the two hour Heartstart course we aim to equip people with the skills they need to help someone in an emergency. Nic showed the qualities that we hope to instill; looking out for others and remaining calm to help someone in need.

Loraine Coleman, Co-ordinator and Schools Project Manager on 01432 850067 or email info@herefordshireheartstart.co.uk or you can write to Herefordshire Heartstart, PO Box 305, HEREFORD HR1 9JD

Notes to Editor:- Please note that Nic is correct and the way that he spells his name.

For details of the Herefordshire Walking Festival go to:- www.walkingfestival.com