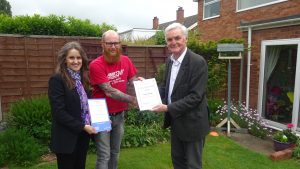 Dr John Ballance, President for Herefordshire Heartstart and Loraine Coleman recently met with Luke, to present him with the two certificates.

Luke saw the lady collapse and have an epileptic fit in front of him in a supermarket. He checked that there wasn’t anything nearby that could harm her. He sent a bystander to call for the ambulance and waited with the lady until the seizure had ended.

The lady regained consciousness shortly after the seizure ended, she was very confused and scared, but Luke remained calm, held her hand and reassured her. The ambulance arrived and Luke was able to explain exactly what had happened.

Loraine Coleman said “We would like to congratulate Luke for having the confidence to use the Heartstart skills that he had learnt. Well done Luke for staying calm, ensuring the ambulance was called, staying with the lady, putting her into the recovery position and maintaining her airway to protect her breathing. These are vital steps in the chain of survival and helped to save her life.”

“We are always pleased to hear of anyone using the skills in a life threatening emergency, but I was particularly pleased to hear this story, as Luke is not only a member of the public but joined Herefordshire Heartstart as a volunteer last year. Our volunteers come from all walks of life and volunteer Instructors are trained to deliver the skills, but it doesn’t make it any easier when faced with a real life emergency. In fact Luke stated that he felt a fleeting feeling of panic, but that soon passed and he felt able to use the training he had been given to help the casualty.”

Luke works for BT, so doesn’t have a medical background, but has a keen interest in first aid and was willing to learn and give time to the charity. This shows that anyone can learn these skills and potentially go on and use them in real life, they can also be trained up to deliver the skills to pass on this knowledge.

Luke attended a public Heartstart course in 2015 and registered an interest in becoming a volunteer. Luke was interviewed, with the necessary DBS and reference checks being done. Once everything was completed Luke joined as a volunteer, he undertook a volunteer induction and started to help at courses. Luke attended the Heartstart Instructor Training in August 2016. He continued to help at courses and delivered short sections of the training, under the guidance of an experienced instructor until he felt ready to lead a complete course.

Mrs Loraine Coleman, Co-ordinator and Schools Project Manager for Herefordshire Heartstart on 01432 850067 Mon to Thurs 9am to 3pm term time only or email info@herefordshireheartstart.org

Details can also be found by visiting our website:- www.herefordshireheartstart.org

Herefordshire Heartstart are a voluntary organisation and registered charity no 1082309. We receive no government or British Heart Foundation funding and rely on small grants, fundraising and donations to keep this vital service running.

Patron The Countess of Darnley JP. Her Majesty’s Lord-Lieutenant

PRESS RELEASE Another Heartstart Lifesaver recognised for her actions