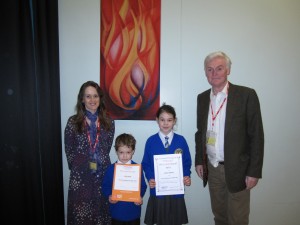 A special assembly was held at Pembridge Primary School on 26th February for pupils, staff and visitors from Herefordshire Heartstart, BBC Hereford and Worcester and the Hereford Times in attendance.

Minnie told the audience what she had done to save Gabriel and Loraine Coleman then gave a presentation to the whole school, staff and visitors and a short demonstration of what Minnie would have done to help clear Gabriel’s airway when he was choking.

At the end of the presentation photos were taken and a radio interview with Andrew Easton from BBC Hereford and Worcester took place, with Minnie, Gabriel, Merry Albright, Loraine Coleman, Sarah James plus pupils from the school, all saying how important it is for children to learn these skills.  It was heart warming to hear the positive comments from pupils of how much they enjoy learning Heartstart skills, and how valuable they believe learning Heartstart skills are.

Minnie Albright was just 8 year’s old when she heroically saved her brother’s life when he choked on a coin after attempting a magic trick that went horribly wrong. Minnie learnt how to save a life when she attended a Heartstart course at her School (Pembridge Primary School).

The interview with Minnie can be heard here:

Loraine Coleman, Herefordshire Heartstart Co-ordinator & Schools Project Manager, said: “ We are incredibly proud of Minnie’s achievement, for staying calm, using the skills she had learnt and saving little Gabriel’s life.  If any school doubted the value of delivering Heartstart training to their pupils, Minnie’s story is proof of how it can mean the difference between life and death. All schools in Herefordshire have been offered this opportunity and there are now 83 schools in Herefordshire who are now delivering Heartstart to their pupils, but there are still a handful that are not”.

Both Herefordshire Heartstart and the British Heart Foundation are very proud of Minnie’s achievement, for keeping her cool, acting quickly and efficiently and saving her brother.  We are grateful that Pembridge Primary School have continued to be part of the Heartstart Scheme, which enabled her to learn Heartstart How to save a life in her school.  If she hadn’t then the outcome could have been very different.

Herefordshire Heartstart support local schools in Herefordshire by delivering training to schools staff, for them then to teach pupils in their classroom.  Schools are then able to deliver a stage age-related programme to their pupils, where children from 5 upwards can learn essential lifesaving skills.  This was previously funded by a grant from the British Heart Foundation, but as a time limited grant, funding has now come to an end.  Herefordshire Heartstart are still looking for funding and would welcome any donations to help continue this vital work with schools.

Herefordshire Heartstart is a registered charity (no 1082309) – donations important

Heartstart is a local initiative supported by the British Heart Foundation however we do not receive any funding from them, nor the government to run our scheme.  We rely on donations and grants to keep this vital service running to benefit the people of Herefordshire.

Heartstart courses are also held in the community.  Anyone can attend a two hour Heartstart course, which teaches how to perform CPR (cardiopulmonary resuscitation), how to deal with choking, loss of consciousness, serious bleeding and how to recognise the warning signs of a heart attack.

The two hour free Heartstart courses are open to anyone from the age of 10 upwards. 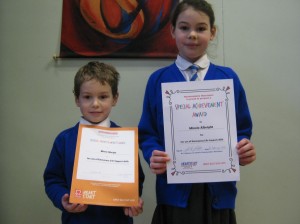 PRESS RELEASE Another Heartstart Lifesaver recognised for her actions