Margaret Prentice from Redditch has been awarded with two certificates of achievement, one from the British Heart Foundation and one from Herefordshire Heartstart for her use of emergency life support skills. 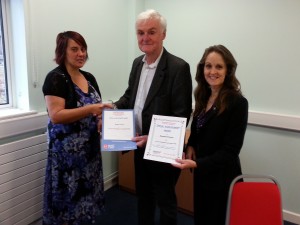 Margaret was waiting to be served at her local supermarket in Redditch, when she saw a man collapse.   The man was fitting so Margaret called for a first aider, no help came, so Margaret was able to help him by putting him into the recovery position.

Margaret kept a close watch on the man, but noticed that he had gone blue and had stopped breathing; she again shouted for help but had to start CPR (cardiopulmonary resuscitation) to try to restart his heart. Time really is of the essence in a life threatening emergency, without early CPR a casualty is unlikely to survive.

She shouted for staff to bring the defibrillator, she attached the pads and carried on CPR. Once the machine had analysed the rhythms, no shock was required, but the machine advised her to continue with CPR.

Thankfully on the 3rd round of CPR the man began to breathe again. Paramedics arrived and he was taken to hospital. We understand that he was doing well though he did require surgery to repair his shoulder following the fall, as he’d hit his shoulders against the counters when he collapsed.

Only a few months before Margaret had attended a Heartstart How to save a life course in Hereford run by Herefordshire Heartstart.

On Monday 13th October, Dr John Ballance, Medical Director and Chairman for Herefordshire Heartstart and Loraine Coleman, met with Margaret to present her with the two certificates.

Loraine and John congratulated her on this achievement. Loraine went on to say:-

“Well done Margaret for staying calm, for correctly assessing the casualty, making him safe and recognising when the situation had changed and that he’d stopped breathing.  She correctly recognised that he then needed CPR and Margaret was able to perform effective chest compressions and rescue breaths and by doing so, she had saved this man’s life.   Margaret was very brave and did absolutely everything right. She deserves a huge pat on the back for saving this man.”

To find out details of free courses in Herefordshire, or if you can help by making a donation or by organising a fundraising event or would like to attend a Heartstart course, please contact:-

Margaret Prentice and her partner Rob Underwood set up Redditch Heartsafe and do an enormous amount of fundraising to purchase defibrillators for schools in the area and had only recently purchased a defibrillator which they had placed in the supermarket only 4 weeks before this incident.

Herefordshire Heartstart provides Heartstart how to save a life courses for the public, voluntary organisations and other groups throughout Herefordshire.

VOLUNTEER OF THE YEAR AWARD FOR LORAINE COLEMAN