Dennis Downey from Leominster has been awarded with two certificates of achievement, one from the British Heart Foundation and one from Herefordshire Heartstart for his use of Heartstart basic emergency life support skills, by helping an unconscious man by placing him in the recovery position. 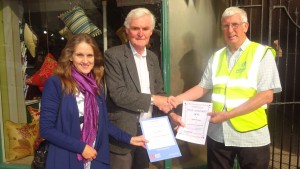 Dennis was inside a building when he saw the gentleman collapse and become unconscious. Dennis swiftly checked his airway and breathing and placed him into the recovery position. He dialled 999 and waited with the man until the paramedics arrived. Before they arrived the man became conscious, but was very confused. The paramedics carried out an ecg and thought he was having a heart attack. Dennis has since seen the gentleman who confirmed that he had suffered a heart attack.

Dr John Ballance, Medical Director and Chairman for Herefordshire Heartstart and Loraine Coleman recently met with Dennis to present him with the two certificates.

Loraine and John congratulated him on this achievement. Loraine went on to say:-

“We would like to congratulate Dennis for having the confidence to use the Heartstart skills that he had learnt. Well done Dennis for staying calm, calling the ambulance, correctly opening his airway and successfully putting him into the recovery position. The simple actions of opening his airway, placing him into the recovery position and calling 999 bought him time until the emergency services arrived and helped to save his life. This is the very principle of Heartstart and the Chain of Survival, ie acting swiftly in a life threatening emergency to prevent cardiac arrest.”

“Had Dennis not learnt these skills and known what to do, the outcome for this man may have been very different.”

To this day Dennis still says “he didn’t think he’d done much!”  “However Dennis did the right thing and I would like to encourage more people to attend Heartstart courses, as you never know when you might need to use the skills to save the life of a friend, loved one, or in this case a complete stranger.”

Heartstart How to save a life courses take just 2 hours and are free to attend. At the course you will learn:- how to deal with a conscious casualty, an unconscious casualty and how to put someone into the recovery position; how to recognise signs and symptoms of a heart attack; how to deal with choking, serious bleeding and CPR (cardiopulmonary resuscitation). Simple Skills Save Lives!

Mrs Loraine Coleman, Co-ordinator/Project Manager on 0845 60 60 654 or email info@herefordshireheartstart.co.uk or you can write to:- 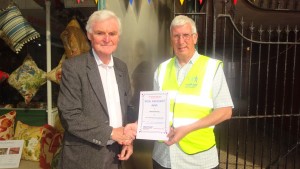 Herefordshire Heartstart are a voluntary organisation/registered charity – number 1082309. We receive no government or British Heart Foundation funding and rely on small grants, fundraising and donations to keep this vital service running.