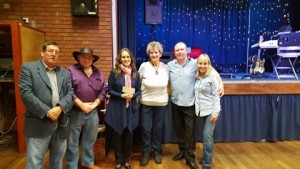 Les Walker Secretary for the Hereford Richmond Place Club recently invited Loraine Coleman from Herefordshire Heartstart to the Richmond Country Music evening, to be presented with a cheque for the charity. A personal donation was also made by Sue Stoker in memory of the club’s Treasurer Tom Stoker.

Also a huge thank you to Sue Stoker and her family, for the additional £500, in memory of Tom Stoker. It was hugely generous of them and I was extremely touched by this kind gesture.”

The charity also supports Schools in the area, with courses being delivered by The Schools Training Supervisor Loraine Coleman. Staff attend a full day’s instructor training and are then able to deliver the Heartstart skills to their pupils.

The money raised will hugely benefit the Schools Heartstart training, which no longer receives any grant funding and now runs on the generosity of the public through donations and fundraising.

This donation will enable us to continue delivering Heartstart training to schools staff, so that more children in Herefordshire can receive Heartstart how to save a life training.

Thank you also to the Richmond Place Club for kindly allowing us to use the club free of charge to deliver the training to schools staff.”

A Heartstart course teaches what to do if someone was unconscious, choking, bleeding seriously, having a heart attack, and how to perform CPR (cardiopulmonary resuscitation).

Photo shows from Left to Right:-